European Development Days (EDD) is organized by the European Commission and the Presidency of the Council of the European Union and is one of the most important forum on European level on international affairs and development cooperation. The importance of taking part in such an event is not only the visibility, but also the advocacy on European level towards gender-sensitive and gender-responsive development cooperation (including global education). It is also important for women’s movement, especially for KARAT Coalition, to be engaged in broader initiatives which join the perspectives of women from donor and partner countries. KARAT Coalition within its gender and development program is advocating for women’s rights in development cooperation on national, regional, European and global level taking into account the voice of its members from Eastern Europe and Central Asia.

The 5th edition of the European Development Days took place in Brussels on 6 and 7 December 2010. KARAT Coalition, together with One World Action, Arci, UN CDF, Solidar, and UN Women, took part in the panels focused on gender equality in development cooperation. Thanks to our participation in EDD we had a possibility to underline the importance of gender issues during this high-level European meeting, among various actors such as representatives of governments, CSOs, Global South partners, European and international officials. Also the third panel discussion in the thematic session was devoted to EU NMS and shaping their policies and practices according to the EU commitments. During the EDD KARAT Coalition was represented by Secretariat staff and members from EU New Members States (Bulgaria, Romania, Slovakia).

The flyer from the event is available HERE

The presentations from the panel discussions are available HERE

KARAT Coalition also participated in the EDD in 2011 which took place in Warsaw, Poland. There KARAT organized the EDD associated conference on gender and development issues.

More information about the idea of EDD and forthcoming edition on: http://www.eudevdays.eu

The panel on gender equality in development cooperation, 2010. 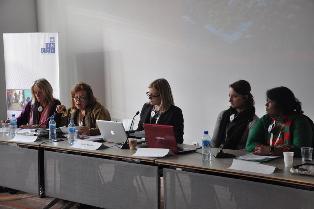 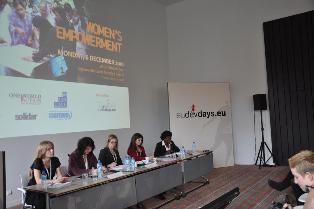 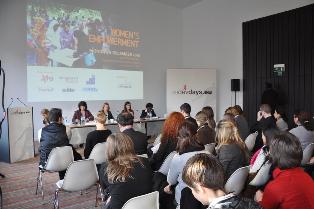