The project “Advancing Gender Equality in Belarus” started on 1 February 2014 and was accomplished on 30 June 2014. The project was financed by the Embassy of the Kingdom of the Netherlands in Poland.

Its long-term goal was to strengthen Belarusian civil society by filling a gap in Belarusian legislation as well as the women’s human rights organizations’ capacity to mobilize and to work together in a struggle to introduce international human rights standards in Belarus.

The project had the following specific objectives:

The project was a response to a need expressed by KARAT’s Belarusian partner organization the Public Association “Women’s Independent Democratic Movement” (PA “WIDM”) which took an active part in all stages of the project’s development.

The main target group of the project were the women’s human rights defenders in Belarus belonging to the Women’s Human Rights Network (WHRN), which is an informal group coordinated by the Public Association “Women’s Independent Democratic Movement” (PA “WIDM”).

The project directly impacted the lives of 8 members of Women’s Human Rights Network (WHRN) who are involved in a work on the Belarusian draft law on gender equality. This group consisted of 2 lawyers and 6 experts on women’s rights.

In Warsaw, Poland on April 28th – 29th , 2014 eight women’s rights advocates from Belarus took part in a strategic meeting titled “Towards effective gender equality legislation in Belarus – analysis and recommendations” on formulating and advocating for gender equality law in Belarus. It focused on dissemination of expertise and utilization of Croatian and Polish experiences in the area of developing a draft law and strategy for its adoption by the parliament. The experts shared information about the challenges faced by the women’s movements on their ways to adopt the law on equal status of women and men in their countries. The participants learned, among others, the details of the Croatian gender equality law, how it works in practice, and the reasons for rejecting the gender equality draft law by the Polish parliament in the 90′. These provided them with the broader perspective on how the social and political climates around the gender equality issue might influence the law’s implementation and practice. The participants and the foreign experts actively discussed the strategy, chances for draft law’s implementation as well as the draft law itself. The outcome of the meeting was a set of recommendations from the Croatian, German and Polish experts for the Belarusian colleagues.

See the Agenda of the Strategic Meeting

Read the report from the strategic meeting:

More photos from the meeting is available HERE 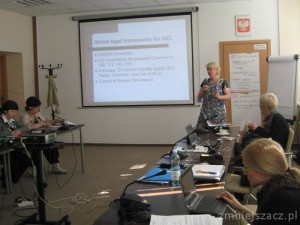 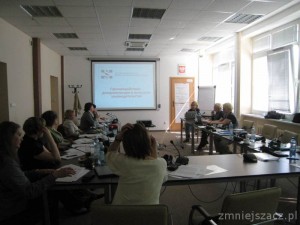 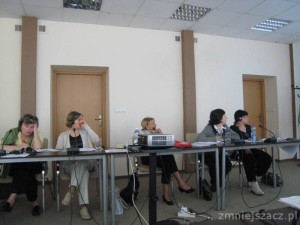 Results of the project:

The project  envisioned the following results which  were met to great extent:

The Belarusian participants were highly satisfied with the experts’ presentations, discussions and recommendations for their further work for advancing gender equality in their country. The experts gave the participants very concrete advices on how to improve the draft law to meet the international standards and guarantee a good protection of women’s rights. What is important, the Belarusian women’s rights activists not only found information received during the meeting useful for their work on the draft law but also appreciated a lot the foreign experts’ support for their case. The experts’ comments and recommendations to the draft law have been concluded in the report from the meeting developed by KARAT and disseminated among the participants.

2) Strengthening the capacity of the Belarusian experts to advocate for the adoption and then implementation of the gender equality law and standards in Belarus.

The Belarusian participants were highly satisfied with the presentations of Croatian and Polish experts who focused on the lobbying strategies for the gender equality legislation. The participants had an opportunity to ask questions concerning the concrete lobbying campaigns undertook by the Croatian and Polish women’s organizations, shared their concerns about the chances for successful lobbying activities in terms of a political situation in Belarus, and received the specific recommendations on the most effective lobbying strategy in a current political and social context of the country.

3) Developed resource material (report from the strategic meeting) to be shared with the larger women’s rights advocates community in Belarus and which encompasses basic information on formulating effective law on gender equality.

By the end of May the detailed report from the meeting was finalized and shared with the participants of the meeting. The report encompasses the key fragments of the experts’ presentations as well as the discussions. It will serve as a tool supporting the Belarusian participants’ work on legislation and advocacy for gender equality in Belarus. PA “WIDM” is responsible for circulating the report to the human rights advocates in Belarus.

Discrimination against women and violations of women’s human rights are widespread in all spheres of life in Belarus. Women are still deprived of opportunities in professional advancement, salary increases, access to professional positions and power. The burning issues invariably remain: domestic violence, human trafficking, sexual abuse, economic discrepancies, discrimination on the job market and the so-called “glass ceiling” –obstacles that make it harder for women to access high decision-making positions. The UN Committee on the Elimination of Discrimination Against Women (CEDAW) and other international human rights bodies have expressed their concerns a number of times about the state’s failure to place high priority on addressing women’s rights issues. The Belarusian authorities, however, are reluctant to take proactive steps to advance the situation of women and fail to provide them with the basic protection from discrimination and violence. In its last Concluding Observations, released after the reviewing session of the State’s compliance with the CEDAW provisions in 2011, the CEDAW Committee specifically highlighted the problem of “the absence of a specific prohibition of discrimination against women in all areas of life in national legislation, in line with article 1 and 2 of the Convention”. It emphasized “the absence of a law on gender equality” and urged the State Party to adopt such legislation ”including a clear definition of all forms of discrimination against women, covering both direct and indirect discrimination”.

Belarusian non-government organizations (NGOs) started working on this issue as early as the 1990’s, pushing for the adoption of a gender equality law and a law to prevent and eradicate domestic violence. The constant pressure exerted by international human rights institutions along with the sustained campaign of women’s organizations in Belarus for the adoption of these laws finally led to the incorporation of these issues into the National Plan of Action on Gender Equality (NPAGE) for the years 2011-2015. However, there was a justified concern that the authorities would not take pro-active steps to facilitate these legislative processes. Thus, the Public Association “Women’s Independent Democratic Movement” (PA “WIDM”) from Minsk, which is the coordinator of an informal network of women’s rights defenders in Belarus (Women’s Human Rights Network – WHRN), started working on developing the draft laws and lobbying for their adoption. The work on the draft law on preventing and eradicating domestic violence was much more involved and took much longer than expected but was finally finished in the first half of 2013, thanks in part to the generous support of the Dutch Embassy which allowed for PA “WIDM” to consult with Polish experts and to complete the final version. The draft of this first law is currently being consulted with the Belarusian Ministries. Building on this momentum and previous training, the next crucial action is now under way. In September 2013, PA “WIDM” started working with experts in gender equality to develop a draft law on gender equality.

This is the opportune time to develop and lobby for this law. Firstly, the gender equality issue has become recognized by the authorities and thus incorporated into the National Plan of Action on Gender Equality (NPAGE) for the years 2011-2015. Secondly, Marianna Shchetkina – who is the head of National Council for Gender Equality and also the Minister of Labor and Social Security – is in favor of adopting a law that protects women’s rights in Belarus. Additionally, among the Council’s members there are four representatives of women’s non-government organizations, one of whom is Ludmila Petina, the chairperson of PA “WIDM”. One very important fact is that not only NGOs are engaged in lobbying for the gender equality law but also several pro-democratic parties, including one independent trade union. In December 2012 these parties and NGOs signed a memorandum on the implementation of the National Gender Platform (NGP) which outlines efforts to secure gender equality in Belarus and for the public to have a greater say in gender policy decisions. The NGP was based on international treaties signed by Belarus such as the Convention on the Elimination of All Forms of Discrimination against Women (CEDAW), the Beijing Platform for Action and the UN Millennium Declaration, as well as specific recommendations given by the CEDAW Committee to Belarus. Formulating the draft law on gender equality – to accompany the recently completed draft law on protecting and eradicating domestic violence is a crucial step in the process towards achieving gender equality in Belarus. For Belarusian women’s rights defenders, it is vital that these laws are based on the best examples of international gender equality legislation.

All the activities within the project „Advancing gender equality in Poland” are possible thanks to financial support of the Embassy of the Kingdom of the Netherlands in Poland.