From January until June 2013 KARAT conducted  a project aimed at the advancement of the legal protection of women’s human rights in Belarus through adoption of the relevant and well-formulated laws on gender equality as well as the prevention and eradiction of domestic violence.  All the activities within the project were carried on in cooperation with the Belorussian partner – Public Association “Women’s Independent Democratic Movement” (PA “WIDM”).

The project had the following specific objectives:

Activities and its outcome:

On April 18-21, 2013 ten women’s rights advocates from Belarus took part in a strategic training in Warsaw, Poland on legal protection of women from discrimination and domestic violence. The training was a response to the current challenges faced by the Belorussian women’s movement. It focused on raising the knowledge of participants about the essential elements that constitute a good law against gender-based discrimination and violence. The participants learned about the best European examples of this kind of legislation, and the European Union and United Nations’ recommendations on effective prevention of gender-based discrimination and violence, as well as victim protection. The lawyers who conducted the training shared Polish experiences of developing the draft bills to make the participants aware of problems they might encounter while working on and presenting their drafts to the relevant state’s authorities. The women’s rights advocates had an opportunity to discuss with the Polish experts the weak and strong points of their draft bill on domestic violence in the light of international legislation as well as opportunities and threats in a context of current social and political situation in Belarus.

The training was one of the series of initiatives that Belorussian women’s organizations plan to undertake to make the state’s authorities adopt the bill on equal status of women and men as well as the bill on preventing and combating domestic violence. The training was organized by KARAT with its Belarusian member organization Public Association of “Women’s Independent Democratic Movement” (PA ‘WIDM’). 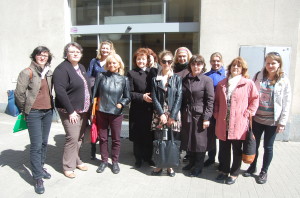 One of the training’s result was a development of the resource material “Legal measures to protect women from violence and discrimination“ which is a relevant source of knowledge about the United Nations, European Union and Polish anti-discrimination and anti-violence legislation in a context of gender. It focuses on EU directives prohibiting gender discrimination, the recommendations of Council of Europe and United Nations on model regulations concerning counteracting domestic violence as well as Polish regulations aimed at protecting women from discrimination which can be found in the Labour Code, Polish Constitution, Anti-discrimination Act and Law on Domestic Violence.

The resource material is available:

Despite the fact that Belarus is a State Party to the United Nations Convention on the Elimination of All Forms of Discrimination Against Women (CEDAW) and is obliged to implement its provisions, the Government does not show enough commitment and proves to be rather reluctant in taking a pro-active steps to advance the situation of women. Until now, the Belorussian authorities have not adopted the basic legal provisions aimed at protecting fundamental women’s rights, such as prohibition of discrimination and law on preventing and eradicating domestic violence.

Although the adoption of these laws has been incorporated in the National Plan of Action on Gender Equality (NPAGE), there is a justified concern that the authorities will not take pro-active steps to facilitate these legislative processes. In other words, it seems hardly possible that decision-makers would come up with relevant draft law proposals on gender equality, as well as on domestic violence.

Thus the Public Association “Women’s Independent Democratic Movement” (PA “WIDM”) from Minsk, which is a coordinator of the wider women’s rights defenders community in Belarus (Women’s Human Rights Network – WHRN) aims at developing the draft laws and lobby for their adoption. In order to facilitate these processes, the capacity to formulate law provisions of PA “WIDM” and activists from WHRN needs to be strengthened. There is a lot of expertise and experience on developing and adopting such legislation in the Region, that KARAT Coalition operates in (Central and Eastern Europe and Central Asia), as the vast majority of the countries already have gone through these processes, including Poland.

In Poland, the so called “anti-discrimination” law has been adopted in December 2011 and the act on preventing and combating domestic violence has been in force since 2005. Though these laws are far from being perfect, civil society organizations were actively involved in both legislative processes.

In this context, PA “WIDM” together with KARAT launched cooperation aiming at strengthening the capacity of Belorussian women’s rights advocates to develop draft law proposals on gender equality and domestic violence. The goal of this cooperation is to utilize the Polish experiences (successes but also failures) to facilitate the positive legal changes in Belarus.

The situation of women’s rights defenders in Belarus

According to information received from the Public Association “Women’s Independent Democratic Movement” (PA “WIDM”), women’s rights movement has recently slowed down its institutional development due to the struggles for keeping the legal status of organizations. Moreover, the number of women’s organizations decreased in recent years and there are only 32 women’s organizations officially registered at the moment. This has obviously a negative impact on women’s movement’s capacity to implement its mission and influence the policy-making.

There is a clear tendency of the authorities to continue to worsen the conditions for the functioning of the third sector, including the restrictions related to receiving the foreign funding. As a result of such policy, democratic NGOs, including women’s NGOs, have only limited capacity to participate in public decision-making processes and are deprived of the opportunity to implement their basic function – representing the interests of citizens in relations with the state.

Discrimination against women in Belarus

Discrimination against women and violations of women’s human rights are widely spread in all spheres of life in Belarus. The CEDAW Committee and other international human rights bodies have expressed their concerns a number of times about the state’s failure to place high priority on addressing women’s rights issues.

In its last Concluding Observations, released after the reviewing session of the State’s compliance with the CEDAW provisions in 2011, the CEDAW Committee specifically highlighted the problem of “the absence of a specific prohibition of discrimination against women in all areas of life in national legislation, in line with article 1 and 2 of the Convention”. It also noted “the absence of a law on gender equality” and urged the State Party to adopt such legislation, ”including a clear definition of all forms of discrimination against women, covering both direct and indirect discrimination”.

The advancement of the status of women in Belarus will not be possible, unless effective anti-discrimination legislation is put in place.

The prevalence of various forms of domestic violence against women (physical, sexual, psychological, and economic) is one of the most acute areas of women’s rights violations in Belarus. The country is falling short of its international obligations to eradicate the phenomenon and until now the problem of domestic violence has not been comprehensively and adequately addressed. Most importantly, in Belarus (unlike nearly all European countries) there is no specific law on preventing and eradicating domestic violence.The need for the adoption of such law has been included in the current National Plan of Action on Gender Equality (NPAGE). Nonetheless, NPAGE is poorly resourced, as well as given a low public profile, it is important in the context of exerting the pressure for the actual adoption of the act on preventing and combating domestic violence. The previous editions of NPAGE proved to have only limited impact and many goals remained not to be addressed. Thus a sustained advocacy of the Belarusian women’s rights advocates, as well as international human rights institutions is needed to facilitate the positive changes.

All the activities within the project “Mobilization for the enhanced legal protection of women’s rights in Belarus” have been possible thanks to financial support of the Embassy of the Kingdom of the Netherlands.