KARAT » Projekty » Through Their Eyes, Through Ours

What were the effects of the project:

• Rise of awareness of EU general public, NGOs and decision makers (particularly those from New Member States) about the development problems experienced by women in developing countries of Eastern Europe, Balkans and Caucasus.

• Production of the materials that ensured a greater access of EU public to comprehensive, easy to understand information tackling the problems faced by women from the developing countries of the above mentioned region.

• Elimination of negative stereotypes associated with an economic position of women from the above mentioned countries.

How were we working:

The photo exhibition depicting women of Eastern Europe, Balkans and Caucasus in their economic context was shown in Poland (Warsaw, Poznań), Slovakia (Bratislava), Germany (Berlin, Bonn), Switzerland (Geneva), Bulgaria (Sofia), Romania (Bucharest) and Belgium (Brussels). The exhibition consisted of photographs taken by women from Albania, Azerbaijan, Armenia, Belarus, Bosnia and Herzegovina, Georgia, Macedonia, Moldova, Montenegro, Kyrgyzstan, Serbia, Ukraine and Uzbekistan that had been submitted to a photo contest in 2008. The winners of the contest were selected by an international jury in 2008.

The electronic version of the exhibition is available HERE

While the project itself ended if you are interested in having the exhibition shown in your organization/institution/firm/school etc or at any event organized by you please contact KARAT Secretariat.

Six young women from the new EU member states took part in data gathering tours in the Caucasus and Balkans  to create innovative awareness raising materials. As a result following tools have been created:

• Movie “Her Story” by Paulina Jędrzejewska from Poland. The movie is available in Polish and English version. You can watch the movie at: serwer.modernartsmanagement.com/HerStory_eng.mp4.zip

• Toolkit “Gender Mainstreaming in Development Cooperation” by Milla o’Sullivan from Czech Republic. The toolkit is available in Polish, English and Czech version.

• Images of socio-economic situation of women in Central Asia and Eastern Europe. Available in English, Polish, Slovak and German

• Educational Pack” Women in Development”. The main part of this educational pack is a scenario which is avalible here in Polish and English version. The whole pack you can receive via email sending your request to KARAT’s Office.

• Project leaflet “Through Their Eyes, through Ours”. Available in English 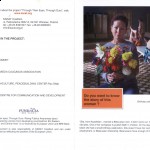 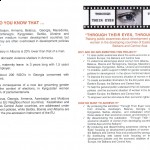 Photobank is an ogoing initiative which has started during the project. It is a database of photos depicting women from Central and Eastern Europe and Central Asia in a non-stereotypical manner. The photos can be used by media, NGOs, CSOs and other interested bodies for the purposes of awareness raising, knowledge sharing, promotion of human rights and development issues.

The Photobank was created as the response to the fact that photos showing women from Central and Eastern Europe and Central Asia in a non-stereotypical way are quite difficult to access. So if you yourself have such photos and would like to add it to our data base please contact: KARAT Secretariat.

You can find photo that we have already collected HERE

• PPS Presentation „Through Their Eyes, Through Ours”. Watch the presentation HERE